Five essentials of life with God 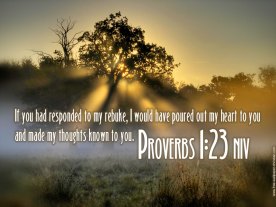 The Old Testament book of Proverbs invites the reader to sit in on a conversation between a father and a son. The line, “Listen, my son, to your father’s instruction…” (1:7), makes matters intensely personal. In Proverbs 1-7, we walk with a father as he prepares his son for life in the real world.

Apparently this young man was raised in a good family. His mother and father were careful to instruct him in the ways of God. Yet, as the son prepares to for life as an adult, the father makes no assumptions about his son’s strength to withstand dangers and temptations.

You won’t hear this father saying, “We raised him right, so he’ll do the right thing!” The father wisely recognized that the allurements of life’s pleasures have subtle and hidden dangers that tempt all of us. So he took one more opportunity to expose the dangers for what they are and to remind his son to adhere to the teaching he had received from his parents.

Some parents hold misguided notions that if they do their parenting “right,” it guarantees their children will turn out “right.” These are the parents who are inordinately surprised when their teenagers do normal teenage stuff. They lament, “We raised him the ‘right’ way, I just don’t understand?”

Parents who say things like this underestimate both the sin nature in their child and the pervasive power of evil in general. They also reveal the possibility of an unhealthy connection between their emotions and their child’s actions. Parenting is not about me or how I look to others but about molding and shaping the life of our children as stewards of God’s rightful ownership. See:

In all that the father has to say to his son, he has one primary concern for him. “Wisdom is supreme; therefore get wisdom. Though it cost all you have, get understanding” (Proverbs 4:7). The father pictures life as an encounter with competing voices clamoring for our devotion. Of all the voices, he implores his son to listen to the voice of wisdom.

“Wisdom shouts in the street, she lifts her voice in the square, at the head of the noisy streets she cries out, at the entrance of the gates of the city, she utters her sayings.” (pr. 1:20-21)

“At the head of the noisy streets”, “at the entrance of the gates in the city”— in the city, wisdom is pictured “shouting”, “raising her voice”, “crying out”, and “uttering her sayings”, or “making her speech.”  Wisdom is not presenting herself in the quiet place of meditation.  She does not call out in the halls of academia.  “. . . the offer of wisdom is to the man in the street, and for the business of living, not to an elite for the pursuit of scholarship” (Derek Kidner, TOTC).

Wisdom “. . . strides from the ‘open squares’ (plazas used as markets) to the boulevards rumbling with the noise of traffic . . . to the several ‘gates’ where open spaces allowed people to assemble for trade or official business.  No behind-the-hand seductive whispering here; wisdom is a public figure, making her claims in the open and calling her disciples boldly to follow her” (David Hubbard, p. 55, Communicators Commentary).

Wisdom’s call and warning is forcefully presented in the language of choice. Wisdom, in essence says, “Decide now concerning your response to me! Make your choice and realize that your choice will deeply affect your life.”

Wisdom cannot be attained where God is not honored. “For the Lord gives wisdom; from his mouth come knowledge and understanding” (Proverbs 2:6).

This God-centerd focus is what distinguishes biblical proverb literature from other ancient proverbs. In Proverbs 3, the father described life with God using five verbs:

1. Trust in the Lord with all your heart (v.5)
2. Acknowledge Him in all your ways (v.6)
3. Fear the Lord (i.e. don’t be wise in your own eyes) (v.7)
4. Honor the Lord with your wealth (v.9)
5. Do not despise the Lord’s discipline (v.11).
Here we have five action points for walking with God describing a relationship — not religion. These are essentials to a life of wisdom because the fear of the Lord is the ongoing prerequisite to a life of wisdom.

A person who fears the Lord accepts wisdom and instruction; takes advice; trusts in the Lord with all his heart; and acknowledges the Lord in all his dealings. This person does not see himself and his own opinion as basis for what he believes and does. He recognizes his own inadequacies and God’s superiority.  Therefore he is teachable and accepts counsel.In contrast, fools despise wisdom and instruction; they scoff at rebuke; the fool’s way seems right to him; he is wise in his own eyes; he does not fear the Lord; and he does not accept advice and counsel unless it agrees with what he already concludes — he thinks he knows better.

The fear of the Lord being “the beginning” of wisdom does not mean it is the first step and after taken you move on to other matters. It is “the beginning” in that it is the primary and controlling factor in the pursuit of wisdom. To profit from proverbs and gain wisdom you must start with an attitude that recognizes God’s superiority, especially over your own opinions.