Suppose the Bible had never been written 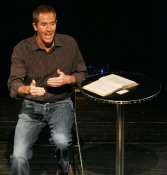 Controversy over comments made by Andy Stanley, (pastor of North Point Community Church outside of Atlanta, Georgia), made me recall a quote from the late OT scholar, Dr. John Bright. I’ll get to Dr. Bright’s comment in a moment. First, a little context.

Andy Stanley is one of the leading younger evangelical figures in America. He is a gifted communicator with a passion for the gospel of Jesus Christ. He has a special interest in explaining truths in ways that the common person can clearly understand. His ministry at North Point Church has extensive influence both locally and globally.

All of this means that when Andy speaks, his words will be closely and widely scrutinized – the price of visibility and influence! (And why we should pray for such leaders).

I am not sure if Andy would admit it, but he could have found a better way to say what it seems he wanted to say. Some of his critics, however, need to realize that Andy effectively communicates in ways that address some of the deeper assumptions held by skeptics. I see this as a loving effort to clear unnecessary confusion that blinds people to the gospel.

A number of bloggers picked up on Andy’s words and offered critical review. Andy graciously commented on one blog and offered important clarification.

“Perhaps the confusion stems from the fact that I was suggesting an approach to talking about “The Bible” in a culture that is no longer moved by “The Bible says.” But I do believe the epicenter of the faith is something that actually happened….”

On one level, Andy’s point needs to be heard by evangelical leaders who keep themselves far too insulated from culture. It’s easy to take our clichés for granted in a world that either doesn’t get it or sneers at it. Phrases like, “The Bible says…” or “The biblical approach….” (in the wider culture) are often ineffective and counterproductive to our desire to encourage people to hear from God.

But there is also a danger with going too far in adjusting our language for culture.

Paraphrases of the Bible like “The Message” offer quite a few examples of overreaching to be colloquial with Scripture. I heard of a church that promoted God’s kingdom as God’s party to get people to “sign on” for God. This is how we don’t want to adjust our language. We can exercise wisdom in this area by simply asking how the audience might hear you when you use certain words. Do you want them to think of their parties when they think of God’s kingdom?

Don’t misunderstand. Relevance is important and many bible teachers fail to see ways that it shaped the very choices of words in the New Testament. I am not advocating the idea that we should only use words from the Bible when teaching and sharing truth.

Those who say, “Stick with the terms used in Scripture!” demonstrate a naive understanding of biblical words. The great New Testament words of salvation (redemption, propitiation, sanctification, justification, reconciliation, etc…) came from the world of that time and had prior meanings and associations ranging from the market place; to the temple; to the courtroom, etc…. Was there risk of misunderstanding when including such terms in the New Testament?

Yes, we need to be careful not to acquiesce to trendy terms if their popular meanings could lead people into serious misunderstandings of God’s revealed word.  Yet we must be willing also to restore some words to richer and fuller meanings based in a God-centered worldview.

I believe I understand what Andy wanted to convey but he could be accused of fallacious reasoning when emphasizing “what happened in history” over the reliability of the written text of Scripture.

When I think about this matter, I prefer what the late OT scholar Dr. John Bright wrote:

“We do not worship a book. On the contrary, the sole legitimate object of worship, and the supreme authority to whom the Christian submits himself, is God — the God who, according to the Scripture, worked his redemptive purpose in Israel and, in the fullness of time, revealed himself in Jesus Christ.  The Christian’s God is the Creator and Lord of all things, and is the Lord also of Scripture.  He existed before there was a Bible, and quite independently of it. He performed his work of creation when no man was there to record it. He gave his covenant law at Sinai, and that law had authority in Israel before the Pentateuch was written. He did his saving work in Jesus Christ, who came, did mighty works, died, and rose again, and this would be just as true had the Gospels never been penned.”

“The Bible, therefore, derives its authority from God; it does not have authority of itself, but rather by virtue of the God to whom it witnesses and who speaks in its pages.  The God of the Bible is the Christians’ supreme authority in all senses of the word.”

“True. Yet there is a practical sense in which this comes to much the same thing. What, after all, would the Christian know of his God, of Christ, and of the nature of the Christian faith apart from the Bible? Suppose for a moment the Bible had never been written or had been lost to us. What would we know of the history and faith of Israel? What would we know of Jesus, his life, his teachings, and the significance of his saving work as the early church understood it? The answer is: precious little” (p. 31, The Authority of the Old Testament, 1975).

See: Is the Bible from God?

8 Responses to Suppose the Bible had never been written